There are a number of steps you need to go through when you set up a campaign to ensure it targets the players you want at the right time and presents them with the correct actions. You can also configure sequences of actions, a conversion event and even looping campaigns.

The steps required to set up a campaign are:

To create a new campaign:

Follow the steps in the sections below to set up your decision point campaign.

Give your campaign a name and description.

Choose which decision point to use when making requests from your game to check this campaign.

Select Add Criteria to specify the values of any parameters sent in your Engage request that should be used as qualification conditions.

For example, to make an Engage request when players fail a mission, pass a missionID or missionName parameter with the request, so you could apply different actions specific missions.

Specify which players are eligible for your campaign.

Your campaign can be restricted to “New Players” that start playing on or after the day that the campaign starts.

Or you can specify one or more segments that the player must be a member of, as previously defined in the Player Segment Manager.

Or you can combine both of these options.

Note: For decision point campaigns, when users exit a segment they are still eligible for the campaign and continue to experience the content.

You can configure your campaign to start immediately or at some time in the future. You can also set up your campaign to run until a defined end date, or to run forever (until you pause or delete it).

Campaign timescale dates and times run in UTC, but the Date time selectors in this interface will reflect your local time, so remember to offset any time settings if you need to.

You can configure the amount of time it takes for players to drop back into a campaign using the player progress reset feature. The value configured here is the number of calendar days that must pass before a player becomes eligible for re-entry.

You can configure your campaign to run as an A/B test, with multiple player cohorts each receiving their own actions, or as a campaign where everybody receives the same actions.

Select Add (+) on the next available empty action to specify an action.

The campaign settings panel is displayed when you add your first action. You can define if your campaign is set to repeat or not. Repeating campaigns will continue to respond to a player matching the selection criteria until the campaign expires, is disabled or the player records a conversion event. A non-repeating campaign only ever responds with a message to a qualifying player once.

When the action is set to send a parameter, the parameter is returned every time the player hits the decision point and qualifies for that action within the campaign.

You can also define a cool down period between repeats.

If your campaign is configured as an A/B test, the campaign settings panel displays additional tabs to create and name the player variant cohorts. An A/B test contains at least two, equally sized player variants. You can add as many variants as you want and the platform distribute players evenly between them. Variant A is always a control group.

Give each player variant a descriptive name. Select Add (+) to add variants.

The example below contains three variants.

Variant A, our control group will take no action

Variant B, our Red Group will be presented an action called “Red Pill”

Variant C, our Blue Group will be presented with an action called “Blue Pill”

See the Actions Manager for more information on setting up Actions.

You can continue to add additional actions, the player will work through them in sequence each time they meet the campaign qualification conditions. The final state switch provides a mechanism to end a campaign for a particular user even if they haven’t sent a conversion event. This would let them proceed to the next campaign in your list if there are multiple prioritized campaigns.

A conversion event to measure the relative success of your player variants can be based on any event that you send and can have parameter values added as additional criteria.

When a player has converted, they are no longer targeted by the campaign. The assumption being that the campaign was a success and the player will move onward, possibly to a new campaign.

Save, Confirm and Start

When you have finished configuring your campaign and confirmed that all your settings are correct you will need to save it and finally “Start” it.

You can save a campaign and return to it later to make changes. This is useful if you need to confirm some of the settings or if multiple people are working on the configuration. However, the campaign will not run until you select Start.

Once a campaign is started you cannot change the settings as this could invalidate the results if done mid-test.

You can clone decision point campaigns from a game’s DEV to LIVE environment, individually or several at a time.

This feature is only available via the legacy Decision Point Campaign page. This is available at the URL: /[account]/[application]/[environment]/engagements

In the Decision Point Campaign page, select the decision point campaigns you want to clone and select Clone.

The cloning wizard then guides you through the cloning process where you choose what to do with the various parts of each campaign. This helps to ensure there are no incompatibilities in any of the newly cloned components. 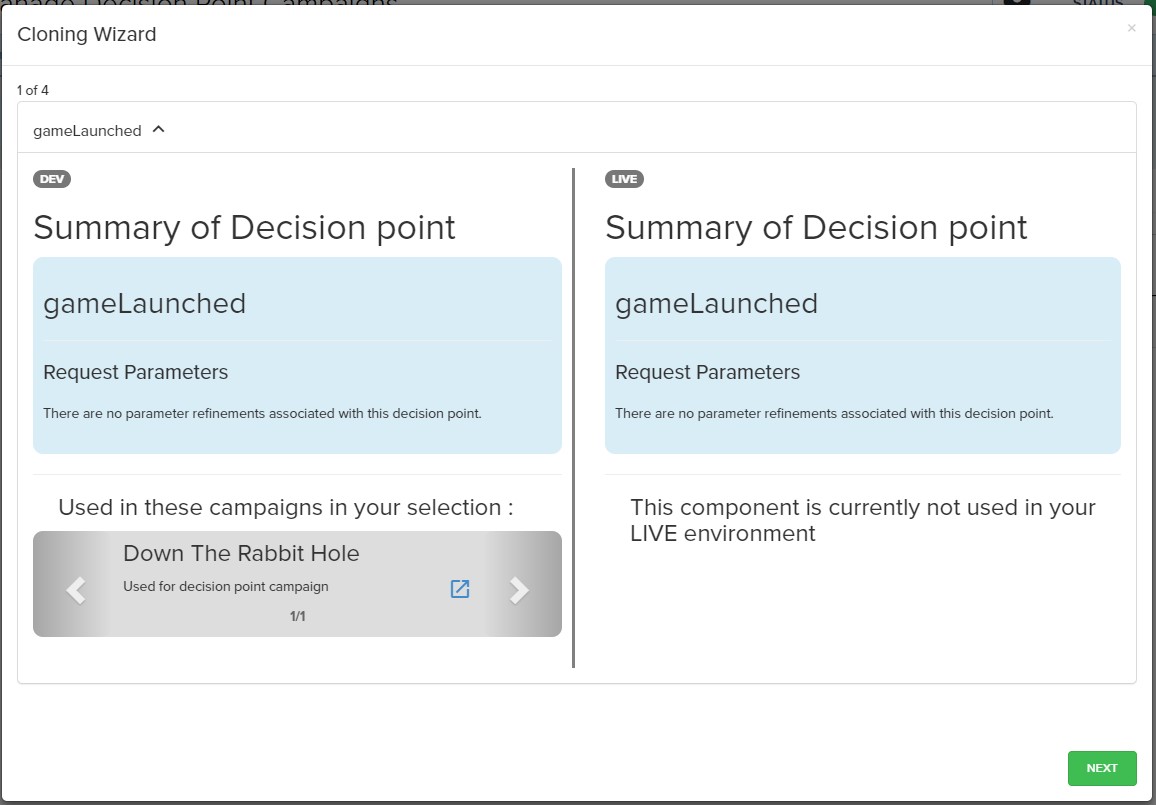 The cloning process creates new actions in the Live environment when required, or you can choose an existing action if you prefer. 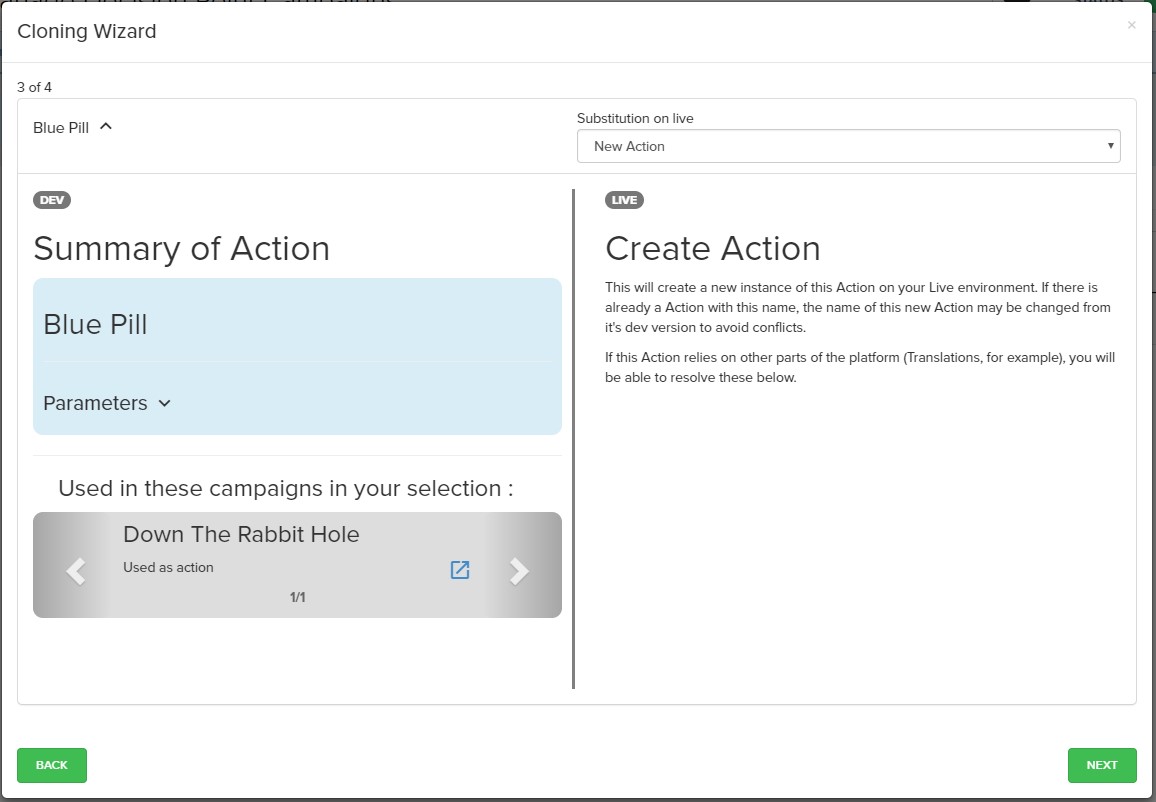 To confirm your choices and clone the campaigns, select Clone in the confirmation screen. If you are cloning a lot of campaigns, a progress bar is displayed to show your progress. 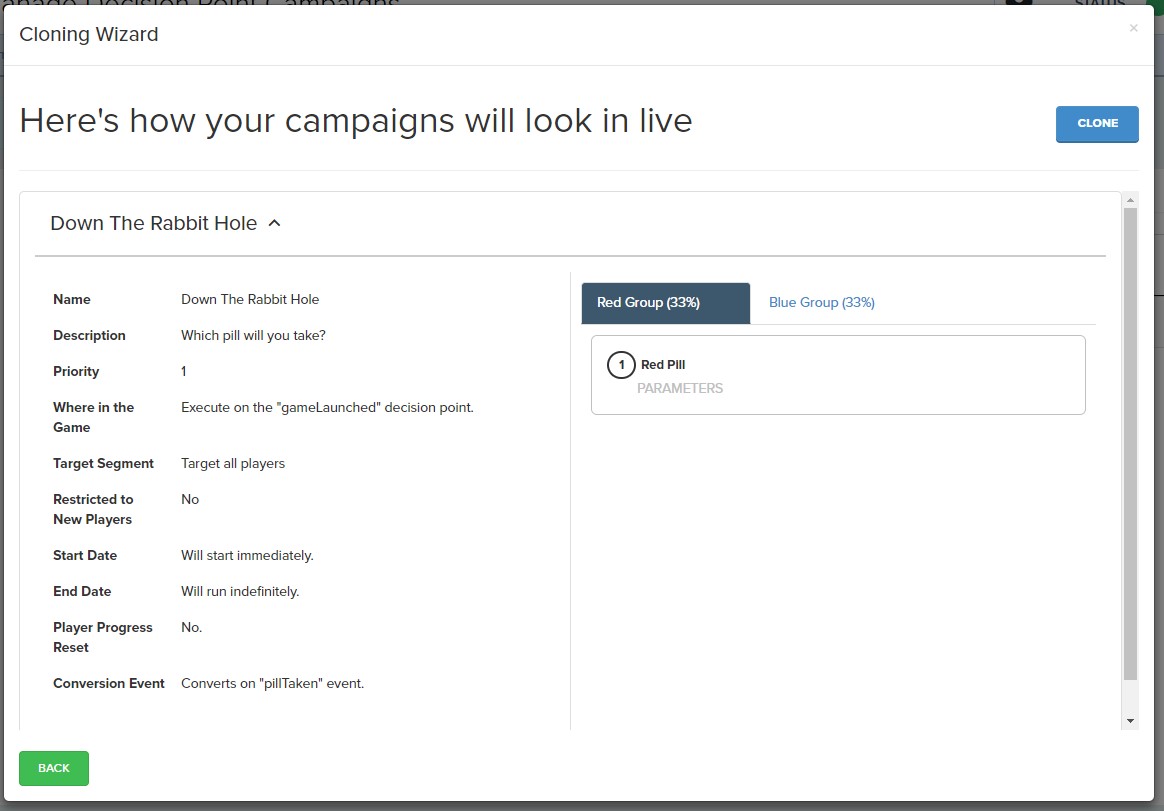 After cloning, your new campaigns are displayed in the LIVE environment, where you can still edit them before launching them.

Campaign cloning is currently only available on decision point campaigns.