Click CREATE in the Image Message panel at the top of the Actions Management page to go to a form that lets you create a new image message action that can deliver targeted, localized popup images to the player at certain points in the game.

The action name panel lets you give your action a descriptive, meaningful name, and contains 3 buttons that:

This panel is used by all the action management screens.

Conversely, if the “Persist between sessions” switch is set to TRUE, the player can trigger the campaign action on the next or any subsequent session, while they still meet the segmentation criteria.

Note: This is different from the “Send image contents on every engage request” checkbox as it relates to the ability to trigger a campaign, instead of the frequency to show content that has been triggered.

Click Add to add buttons to your Image Message popup.

Buttons graphics can be added to an image message. Click Select an Image to upload a new image or select a previously uploaded image. You can view the list of images as a grid or as thumbnails, the grid view will reveal the image size and some other details. Select the image you wish to use as the background then click the Use Selected button to insert it into the background.

The Action drop-down list will define what should happen if the player clicks on the button. The options are:

The position of the button within the image message can be set by entering values into the X and Y inputs, but it’s easier to drag them into position in the preview window.

In this example, the button has been set to Action and the action value has been defined as COINS_100. This will result in a callback being triggered in the App containing an action value of COINS_100; this could then be used to trigger the delivery of a 100 coin gift. You’ll need to coordinate with your developer to ensure that any action values you might want to specify are instrumented and supported in your game client. The URL action will automatically spawn the default client-side browser navigation.

can be used to upload localized versions of the image.

Select or upload the localized image, then assign them to the relevant territories and languages.

These will be used to deliver localized image messages to the player based on the language and territory settings on their device.

Clicking the localization button on the background image will let you specify additional background graphics and associate them to various territories and languages in the same way as you would with buttons as described above.

The Appearance options are None, Clear and Dimmed

The actions that can be performed if a user clicks on the background are Dismiss and No Action. Dismiss will close the image popup.

The preview panel shows what your image message will look like on various devices and also displays localized content based on the territory and language you specify.

It’ll refresh as you modify the image layout controls. If you’ve added buttons to your image message, click on them in the preview interface to drag them to the position you want. 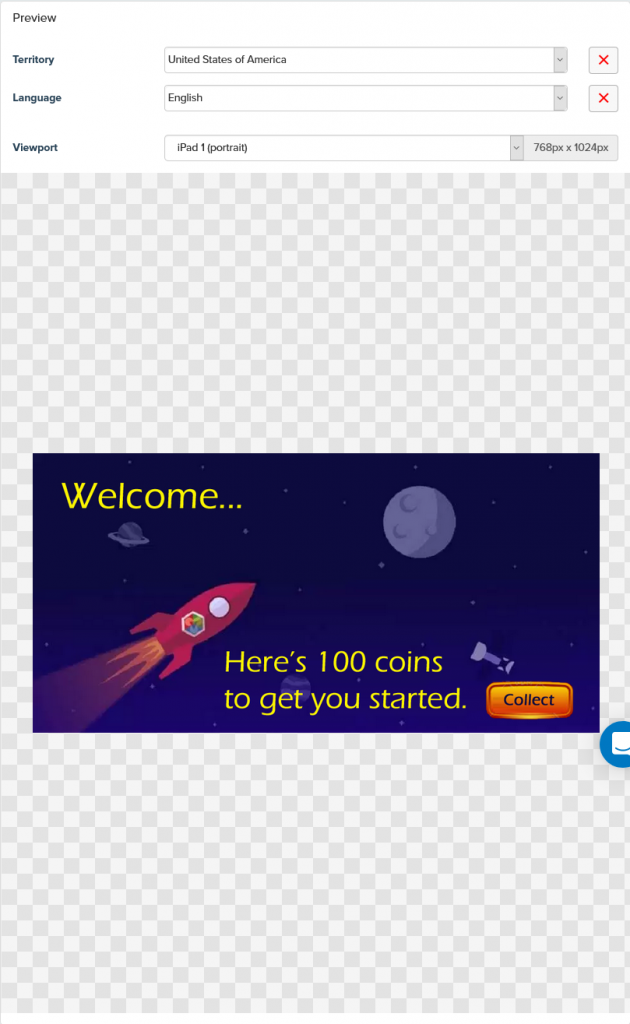 Game parameters can be added to an image message. The procedure for adding them is exactly the same as adding them to a Game Parameters action.

Finally, don’t forget to save your action.

Your newly saved action will now be listed on the Action Management Screen. There are two buttons beside each action so you can Edit or Delete it.

Your action will also now be available for use when you are setting up campaigns.

When an image message action is triggered by a campaign the resulting JSON will be passed back to the game in the Engage response.

The example above will respond with a JSON response as follows.

To access the callbacks provided with the Unity SDK see the following code:

Handle the different actions which the user can perform.

For the Android SDK and the iOS SDK, the code snippets required can be found in the ReadMe file in the linked GitHub repositories.
Language:
Copyright All Rights Reserved © deltadna.com 2019
Contact Us