The game launched on the 1st of January 2013. As an iOS game focused on a relatively hard core player base, there was a considerable amount of anticipation. A core user base had been involved in beta trials for 2 months prior to the launch and there was an active player base of 10k that would move directly over to the final release.

To launch the game a price promotion was set for the 8th of January to give players a 50% discount on virtual currency. This was designed to reward the existing beta players as well as entice new players to start spending quickly 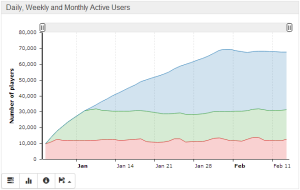 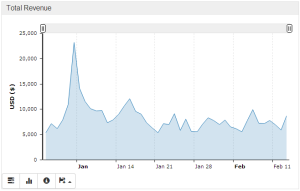 The game quickly started to generate around $6k per day in revenue with a 3x peak related to the discount promotion.

The retention rates are also strong, with 70% of players coming back a second day and 40% of the playing base still playing 30 days later.

This points to an engaged player base, driven by committed players that are investing considerable time into the game.

By looking at the session dashboard we can quickly see that the highest proportion of players have played for between 100 and 500 sessions.

The revenue is also being generated by this player segment, although the peak of revenue generated by the promotion appealed to the earlier players who had played 21-50 and 41-100 sessions.

Generally players are starting to pay within the first hour of gameplay, although as the game matures there is an increasing number of players starting to pay further into the game.