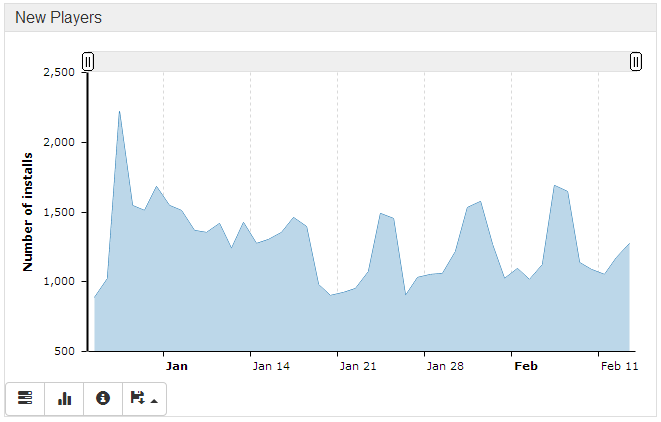 This is the amount of new players that are entering the game each day; if the DAU is flat you can assume that this is also the number of players you are losing on a daily basis.

You can see that the installs varies greatly over a period, the peaks generally will coincide with weekends but also acquisition and promotion will show as peaks of new players. 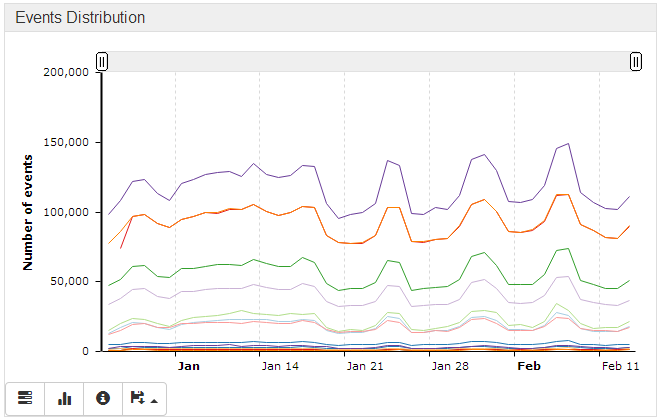 This chart shows the events distribution of events to understand how different events relate to each other. In the example above, half the events are transaction events. This is not just paid for transactions but also virtual money transactions, trading and gifting. This game is heavily focused on social interaction between players and this comes out in the high number of transactions. 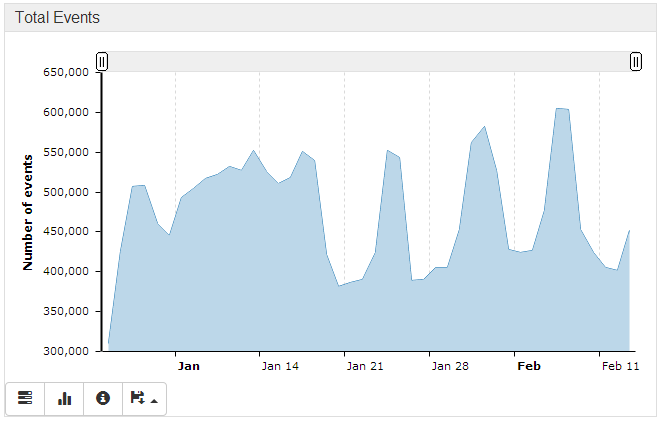 Total Events per Day is the total number of events being generated by all players on a daily basis. It provides an overall measure of interaction with the game.

This is also the basic stats that is driving the cost of Measure and is therefore an easy way of seeing the amount of data that is being collected.

Generally the number of events is related to the type of game, simple games can have less than 50 events per DAU where a complex MMO can have over 500. The number of events will also vary depending on session length which is why the graph spikes at weekends as players play longer and generate on average more events.

If the game is more engaging this average should increase and it is a good indication of engagement of the game as a relative metric.

This is a layered area chart so in the example above the 30-34 age group is the largest group of players, closely followed by the 25-29 and then the 18-24. This points to a game that appeals to an older user base such as an MMO. 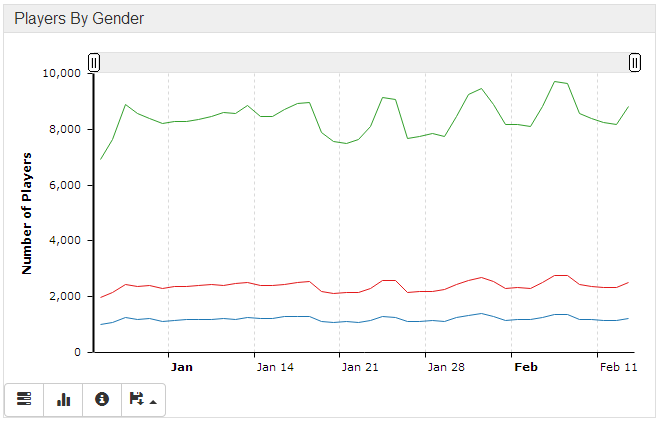 Gender is the split of male and female daily active users. The split of players into gender helps us understand the profile of the playing base and allows us to assess if the game is engaging to its core demographic.

This map shows the average number of visitors per day from the selected country over the chosen time period.

As with age and gender, understanding where the players are originating from will help to focus the gameplay and also validate or disprove theories on who will play the game. There are major differences in games that appeal across the world and finding out that the game is popular in a certain location can be invaluable in helping to determine the direction of the game.

The items dashboard provides information on what items are being bought in game, how many and also what is the cumulative number of items that have been bought since the game started.

Items Bought per Day is the number of virtual goods purchased on a daily basis. The total number will be a factor of the number of players, type of game and range of items. This metric is relative, as players play longer and become more engaged the number of items bought will increase.  It is also related to the length of session which is why again there are the peaks at weekends.

Top Ten Items by Quantity is the most popular virtual goods bought over the date range based on their quantity. This chart gives the % of each of the top ten items being bought, by hovering over the slice you can also see the actual number of items this % relates to. This will tell you the most popular items, to see the full list you will need to use the analysis tool.

Total Items Sold is the cumulative level of virtual goods purchase over time. The slope of the line shows the rate at which items are bought and can be a useful indicator of the increasing or decreasing popularity amongst players.

Total Missions is the number of Mission Starts, Completes, Fails and Aborts on a daily basis. Not all games collected each of the mission outcomes. In the example above only mission started and won are collected as there is no way of either failing or aborting the mission.

This will be very game dependent, arcade games are usually less forgiving and will fail players in missions and allow aborts.

Also some games which include teams of players will use the win or fail as an identification of the team winning or losing and not the individual player. This information does need to be carefully analysed as the exact nature of the mission type will be much related to the game structure and is therefore less generic than other metrics.

Top Ten Missions is the most popular missions by player volume over the date range.

This will generally show you the difficulty curve of missions and should generally follow the order of missions as they are made available to players, at least in the early phase of the game.

Frustration is expected to be a much higher number; aborts should be ideally less than 10% of the number of starts.