The Revenue dashboard provides information on the amount of real money that is being spent in the game. 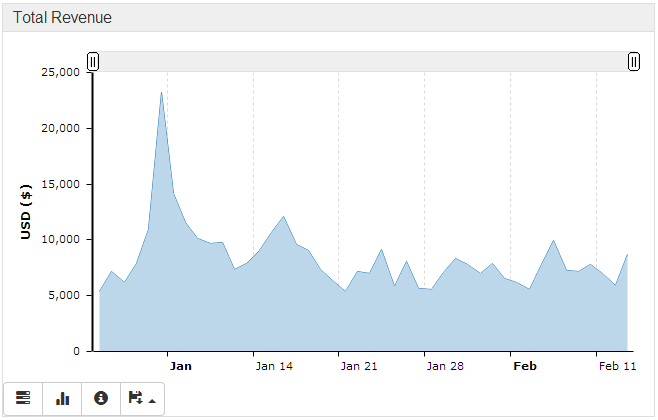 Total Revenue is the total amount of revenue generated each day in US dollars. Revenue is converted from the currency sent by the game into US dollars at the current exchange rate and the amount is prior to any deductions.

Because this data is converted on the fly into dollars it is only a guide to the amount of revenue the game is generating. Revenue will generally peak at weekends and around promotions and gives a good indication of the success of a title. 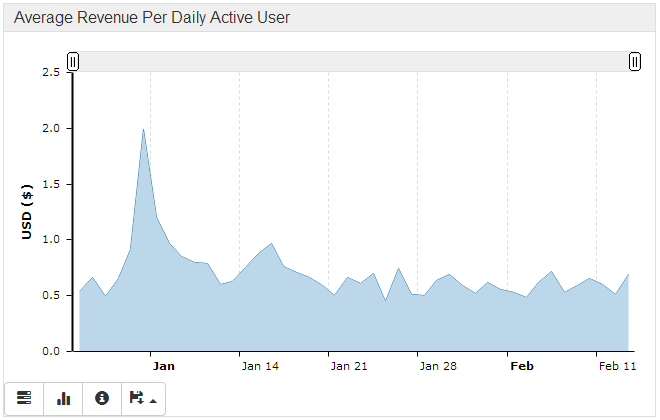 This chart shows the Average Revenue per User. This calculates the total daily revenue divided by all active players and gives a measure of the average contribution for all players. However in reality only a small proportion of players will be paying so it is generally more appropriate to focus on increasing the % Paying and the ARPPU as individual activities. 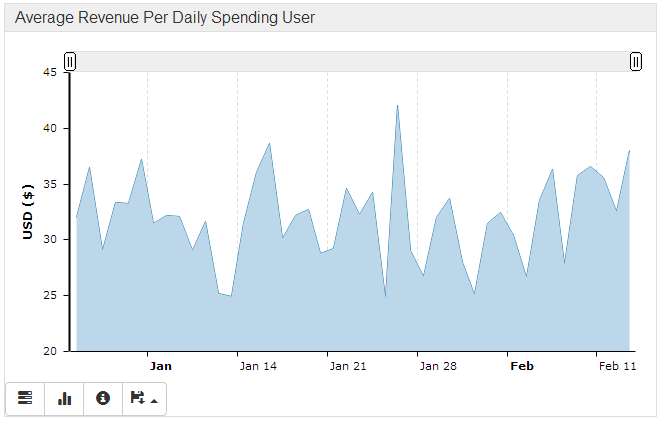 Average Revenue per paying user is the total revenue divided by the number of unique paying users on a day. This gives a good measure of the amount players are spending in the game on a daily basis.

The ARPPU is generally seen as a much better measure of the performance of a game compared to the ARPU. It shows you how much payers are spending and therefore the value of your spending payer base. 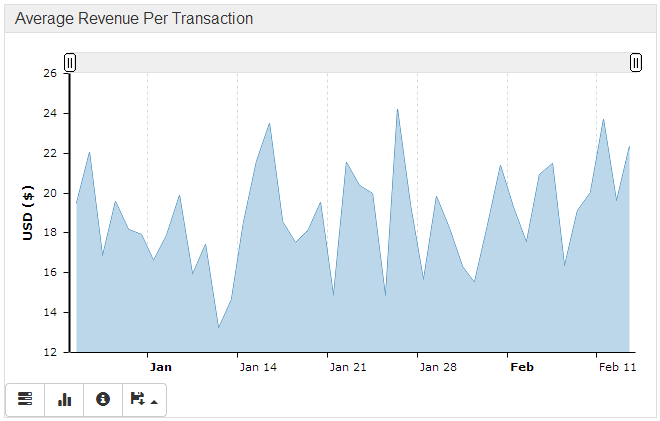 Average Revenue per Transaction is the total revenue divided by the number of transactions on a daily basis. As the playing base changes and the inventory expand it is possible to increase this metric. By deploying starter packs and bundles of goods it is possible to increase the average transaction value by giving players offers based on the purchase of combinations of goods that fit playing styles and strategies. 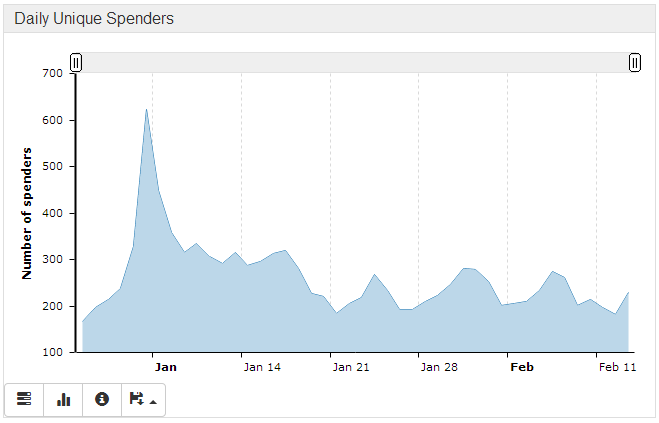 Number of Daily Unique Spenders is the number of paying players on a daily basis. This gives you a good indication of the size of your paying base and the number of spenders in the game over a time period. 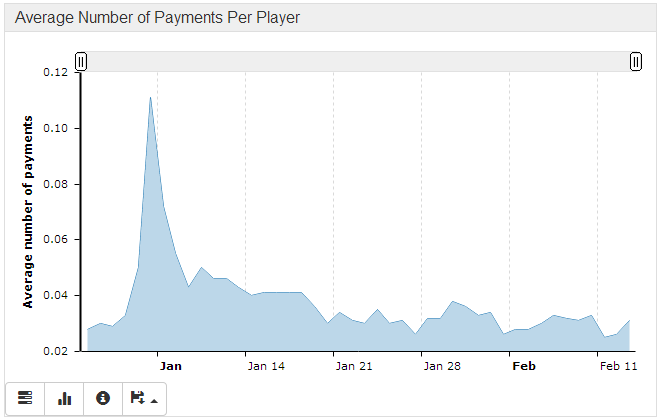 This chart measures the average number of payments per player. A drop in this chart may indicate that existing players are making fewer payments and/or that new players are less inclined to pay. Similarly an increase indicates an increased willingness to pay and/or a shrinking base of non-paying players. 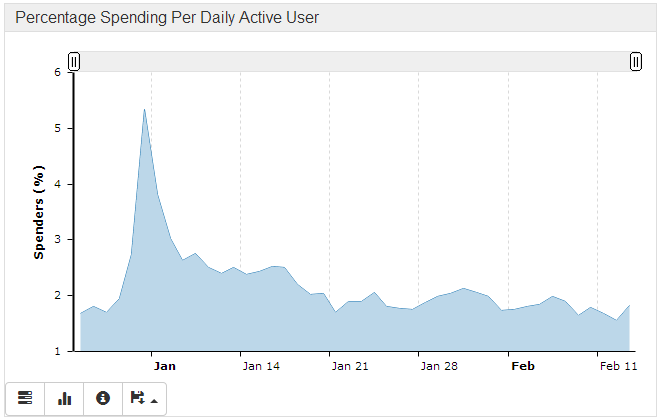 The Percentage Paying is percentage of the daily player base that is generating revenue through purchases.

This chart gives a daily snapshot of the % paying on that day. There are also a general number of percentages paying at the top of the page. This shows the % paying from the start of the data being collected up to the currently selected end date.

The % paying should ideally be above 2%, with very successful games above 5%. The % paying is very much based on the user base the game is focused on. Hard core games generally have a lower active user base and a higher % paying with more casual games the opposite. 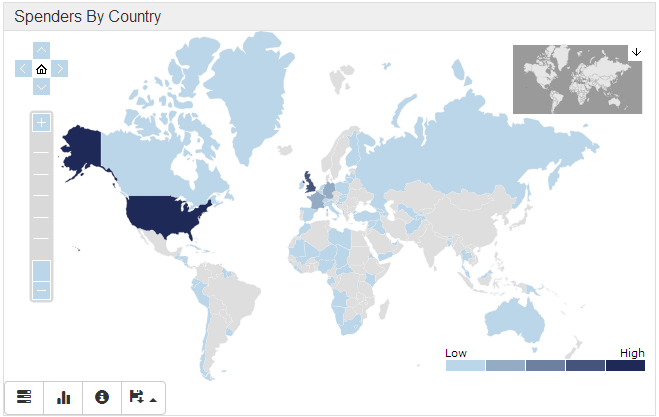 Revenue by Geography is the amount of revenue generated in each country during the date range.

The demographics dashboard provides information on the players that are spending money. 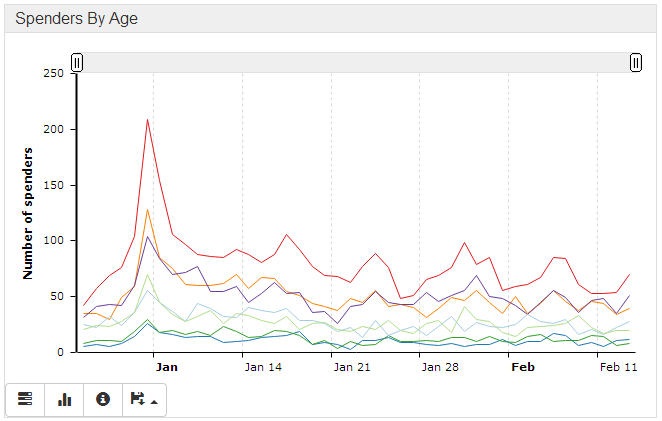 This chart can become difficult to read, switching on and off player groups will allow a better understanding of which age groups are spending money. 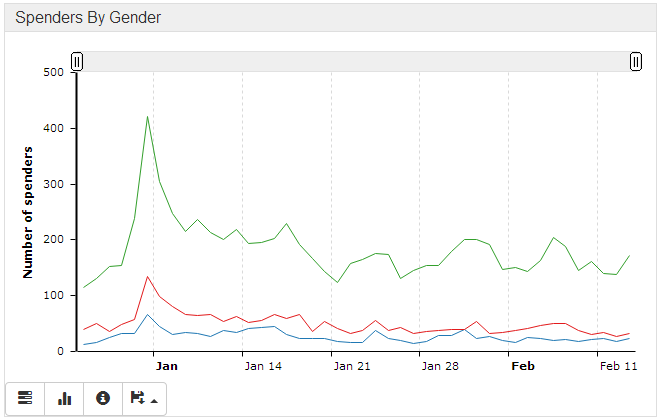 When players start to spend money is a key indicator, often of players start spending too early they will not become committed spenders. This is because the initial payment is so important, possibly the most important event in a game. If players understand why they are spending, what they will achieve and get a better than expected result they are much more likely to repeat spend and move on to become a high spender.

Knowing when in the game players are making that first payment is therefore absolutely crucial and these charts begin to uncover this valuable behaviour.

Revenue by Time to First Payment is the total revenue split by the time played by the player before they make their first payment. It’s clear from this chart that although players will monetise in the first hour the revenue is being generated by players that monetise later in their gameplay.

Revenue by Time to First Payment is the total revenue split by the time played by the player before they make their first payment. The largest amount of revenue is being generated by players that spend 2-3 hours before they spend and significant is even later in the player journey.

Understanding the player’s current value is vital to planning the best way of monetising the game. How many players are whales, low value players and how are these groups changing over time?

Players by current value are the number of daily active users split by their current time value. The current value is the total revenue generated per player banded into revenue groups.

The vast majority of the players are in the bottom band $0-$1; these are the players that aren’t spending money. The interesting observation is that this number appears to be tracking down over time.

This chart shows the total unique payers on each day split by their current value. Unlike the players chart, this chart only looks at paying players on a day. There are a number of high value players that are driving the majority of the revenue.

Payments by current value are the number of unique payments split by the paying player’s lifetime value.  The highlighted day is showing a peak of payments by a certain group of players. This could be single high value players spending a lot and should be investigated further.

Revenue by Current Value is the total revenue generated each day split by the payer’s life time value. It is clear that the users that have spent between $100 and $500 are generating the majority of the revenue.

Total revenue by current value is the banded revenue over the time frame.