deltaDNA SmartAds uses intelligent mediation to ensure that the right ad is shown to the right user at the right time.  SmartAds gives access to over 30 Ad Networks, ensuring that fill rates and revenue are maximized by using the best quality ad networks, to maximize the CPM. By using our segmentation and targeting tools, you can target Ad responsive players and protect those who object to Ads.

Check out our Smart Ads FAQ and Glossary

Setting up SmartAds
SmartAds is set up automatically on every account when you sign up for deltaDNA. You don’t need to do anything additional to include SmartAds running on your account. By adding the  deltaDNA SDK you will be able to start showing Ads in your game and generating income.

The on-demand version of SmartAds is a completely self service implementation of this  technology. This will set up a  dynamic mediation waterfall to make sure the most valuable Ads are being shown to each player as they play the game. You will have the SmartAds Dashboard automatically set up, and access to powerful analytics and control over your Ads through the Engage campaign management system.

Direct Networks are networks that are built in to the SmartAds SDK.  These networks drive the Ad display straight from their own inventory and are directly optimised through the SmartAds technology.

Exchange Networks are accessed through one of a number of exchange partners and are displayed using one of the Direct Networks. This allows SmartAds to access a wide range of Ad Networks without having to bloat the SmartAds SDK with extra code.

SmartAds supports both interstitial and rewarded Ads, using the best Ad network for each Ad type.

Mediation Waterfall
The Mediation Waterfall is the list of Ad Networks that SmartAds will attempt to use, ordered by the highest paying eCPM for that user. Each time SmartAds attempts to show an Ad it will retrieve an Ad from the Network at the top of the Waterfall.  If that network is unable to fill the Ad, then SmartAds will select the next Ad network and so on until either an Ad is available to serve or there is no Ad available from any of the Ad Networks.

The Waterfall itself is delivered to each user at the start of a session, and is optimised for each user to connect  the highest paying networks with the ad placements. SmartAds will then optimise the Mediation Waterfall itself, demoting Networks and managing the floor price, time between Ads and number of Ads in a Session to deliver the best experience to each user.

The management and control of the Waterfall is managed by the deltaDNA platform. The platform will  figure out the expected eCPM for each Network and will use that value  to automatically optimise the Waterfall. This is being done on a continual basis.

The waterfall is also managed by the deltaDNA Ad Ops team for Enterprise clients to increase the revenue of Ads through negotiation with Ad Networks.

House Ads
House Ads are where you run an Ad for your own games in place of a paid for Ad. These are generally run at the bottom of the cascade, to give fill if no paid for Ad is available. SmartAds provides the ability to run House Ads as a part of our Enterprise Managed service and will work with you to make them available and place them correctly within the automated Cascade so as to not impact revenue.

SmartAds Dashboard
A SmartAds dashboard will be automatically added to your game. This dashboard is a custom dashboard and gives you 8 pre defined charts that allows you to see the results of SmartAds. These are the basic charts you will use to monitor the success of SmartAds, but this is by no means the full analysis that is available, because SmartAds gives you event level data on the Ads that are being shown, to which players and how much they are worth you can build custom charts and queries, this is covered in the section on using the Analyze tools with SmartAds.

The eight pre-defined SmartAds charts are: 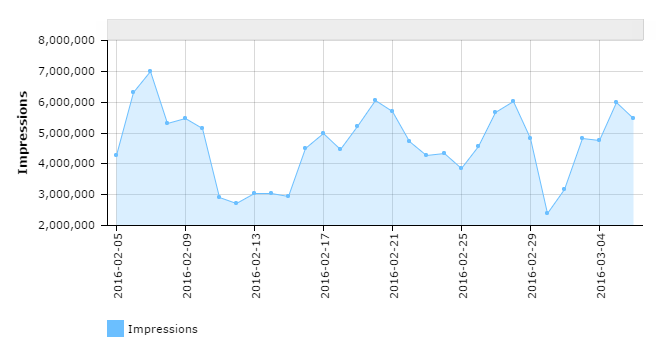 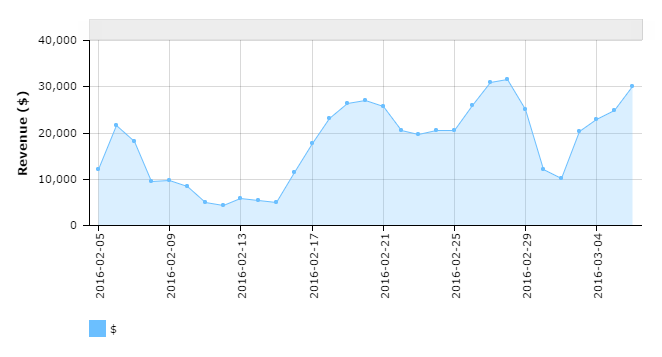 Predicted Revenue per Day
The predicted revenue per day shows the revenue you have generated from Ads each day. Ad networks will often not report revenue until a number of days after the event and the actual revenue is not a final number until the end of the month. The number used in this chart is the predicted revenue calculated by the deltaDNA platform. This number is not exact but generally accurate to within 5% of the actual revenue. This revenue is also in US dollars as that is the revenue reported by all the Ad Networks. 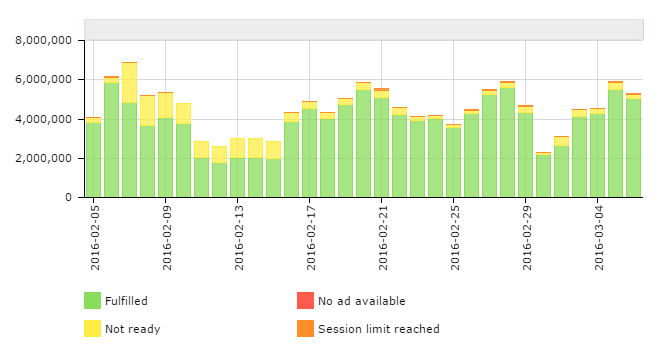 The Fill Rate per Day shows you the number of Ad Requests and the number that were delivered an Ad (Fulfilled). If an Ad was not shown there is a number of reasons why this would happen:

Generally ‘No ad available’ and ‘Not ready’ are the same thing, this is where Smart Ads can not get an appropriate Ad from a Network. SmartAds will attempt to optimise to deliver as close to 100% fill as possible. 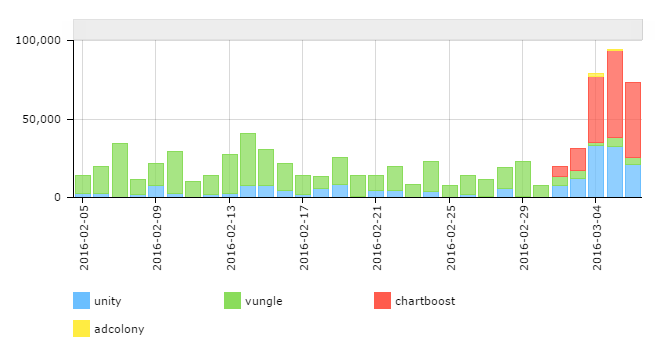 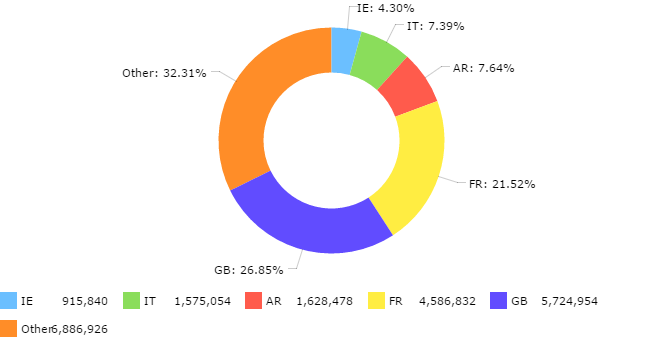 The Country chart shows you the % of impressions per country over the last 30 days. This gives you a good indication of where the users are coming from and which country is generating the highest number of impressions. 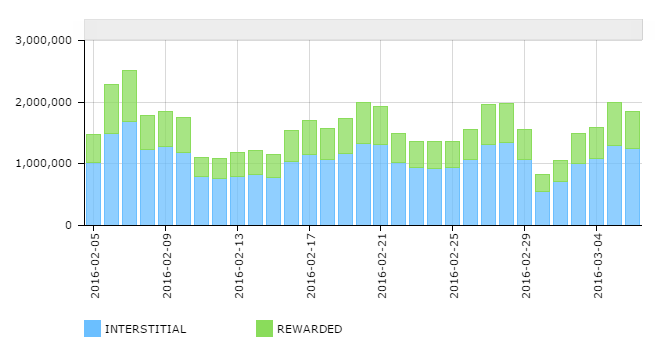 SmartAds supports both interstitial and rewarded Ads. Generally rewarded Ads will have a higher value as users have volunteered or “opted-in” to view the Ad. This chart shows you the split of impressions between Interstitial and Rewarded Ad types. 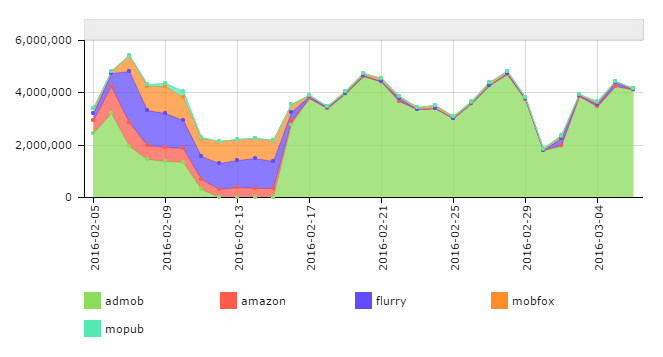 This chart shows the number of impressions each Ad Network is delivering for interstitial Ads. In this example you can see that admob is dominating the impressions, by delivering consistently strong eCPM. 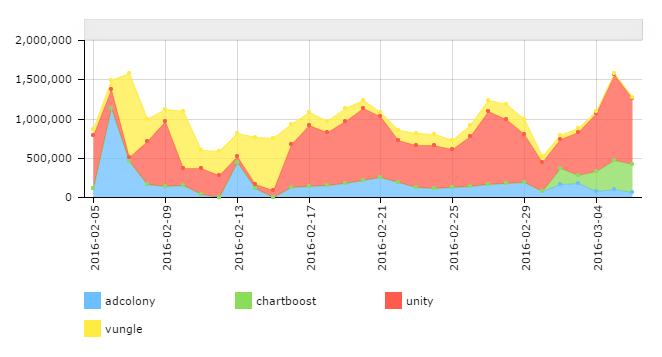 This chart shows the number of impressions each Ad Network is delivering for rewarded Ads placements within your app.  . You can see that unlike interstitials the four Ad Networks are more evenly spread with no simple Ad network dominating. This may be due to changes in eCPM or their ability to fill these ads.

Analyze Smart Ads
The SmartAds SDK automatically generates three events which provide detailed information on  how Ads are being displayed and managed within your game. These three powerful events allow you to analyse the behaviour of the Ads and react to Ads being shown, building both powerful analysis and reactive engagements based on players behaviour.

These three events track the three stages of Ads within a game:

Using these three events which are automatically driven by SmartAds allows you to build a detailed picture of the players behaviour. The eight charts that are preconfigured in the SmartAds dashboard will give you an indication of how this data can be used, but they are only the basics of what can be done by using this data to understand how your players are using Ads in the game.

Controlling Smart Ads with Engage
SmartAds is built to use the Engage tool set on the deltaDNA platform to allow you to control who will see Ads  and who will not see Ads, you can even specify the reward, frequency and limits for each ad decision point  or placement

The Decision point is defined in the platform and represents the point in the game where you might want to show an Ad. When the call is made, the SmartAds SDK will check to make sure that for this specific player a campaign has been set up to control the Ad. If there is a campaign set up the display of the Ad will be controlled by this campaign.

For each point in the game where you show an Ad, you should provide a recognisable Decision Point that is set up in the platform. Having more points that you could show an Ad than you initially intend using allows you to experiment with different configurations and try different strategies without the need for a new build or certification.

To control SmartAds there is a new SmartAds Action in the Action menu.

When you create the SmartAds action you can define whether the ad is an Interstitial or Rewarded, control the duration to wait between ads and the number of ads that can be shown per session or per day. You can also specify the reward type and amount for rewarded ads.

With the action set up you can build campaigns to deliver a personalized ad strategy to different player segments at various decision points (placements) in your game.

In this example the campaign is setup to gift all players 100 Gold up to 5 times per session or 15 times per day, with a 45 second cooldown between ads for watching a rewarded ad on ad placement decision point “rewardedAd1” .

By setting up these campaigns you can control your Ad Strategy and A/B test  different strategies to different player segments.

The SmartAds Personalization Tutorial shows you how to setup SmartAds campaigns and implement them in your game in more detail.

Controls on the SETUP->SMARTADS->SmartAds Preferences page let you limit the number of ads each player receives per session, configure the minimum delay between ads and set a minimum floor price for your Ads.