The Event Triggered Campaigns page displays a list of current campaigns you can create new campaigns and Pause, Restart, View, Edit, Duplicate and Delete existing ones. There is a Search bar at the top of the campaign list to filter your results and a pop-out sidebar to the right that contains additional filtering options.

Click on the Create Campaign button at the top of the page to open the campaign creation tool. The wizard contains 6 steps that need to be completed before you can launch a campaign. There is a Next button to navigate from page to page, you can also navigate by clicking on the breadcrumbs at the top of the page. There is a Save button on each page, you can save a partially completed campaign and come back to it later. Finally, you will need to click the Begin button on the final campaign confirmation page to start your campaign.

The pages within the campaign creation wizard are as follows:

Give your campaign a name and description on the Details page, the name will be displayed in the Event Triggered Campaign list and on any reports.

You can set the campaign priority in case the player qualifies for more than one active campaign on the same event trigger, higher numbers take priority over lower ones.

The Start and End date can be set if you want your campaign to run at a particular time, or leave them in the default position if you want the campaign to start immediately and run until you pause or delete it.

The final control on the Details page is the “Player Progress Reset” control, use it to let the player to become eligible for the campaign again at a later date, even if they have already converted on this campaign. 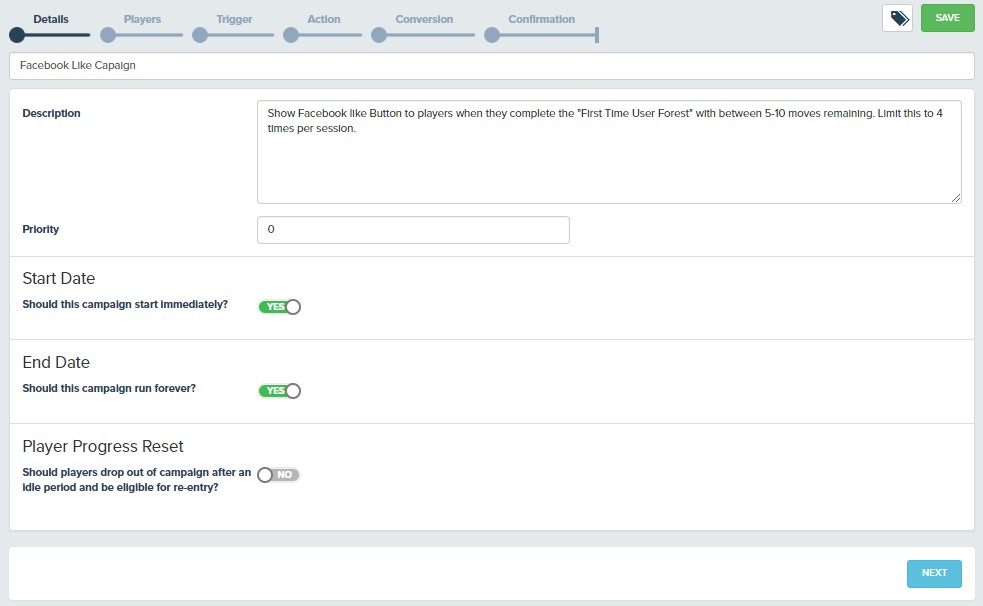 The players page is used to select the segment of players that will be eligible for the campaign. The campaign logic and content will be downloaded to all players in the segment at the start of each gameplay session.

As well as using the Segment control, you can further refine the player selection by adding session parameter criteria. Session parameters are just additional details that SDK reveals about itself at the start of each session. Your campaign can also be restricted to “New Players” that start playing on or after the day that the campaign starts.

Note: For event triggered campaigns, when users exit a segment they are no longer eligible for the campaign.

The trigger page lets you select the event and parameters that will be used to trigger the campaign content on the players device. You can also specify criteria on the event parameters that need to be matched to trigger the campaign content. You can add multiple parameter conditions, that all need to be met, to each criteria block. You also can add multiple criteria blocks with OR statements between them. 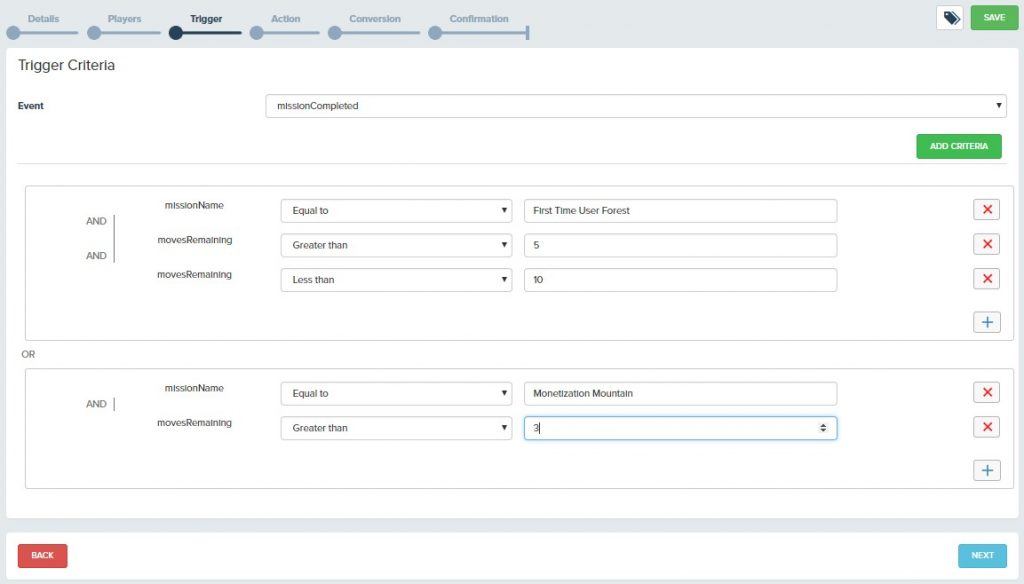 You specify the content you want to deliver to the player on the Action page. Event Triggered Campaigns support Game Parameter and Image Message Actions.

Event triggered campaigns also support AB Testing. You can add multiple variant groups and specify different actions for each. By default the platform will try to make each of the variants the same size, but you can modify this to suit your needs as long as the variants all add up to 100%

The per-session execution limit button will control the number of times the action can be displayed to the player in a single session, providing they trigger the campaign multiple times. 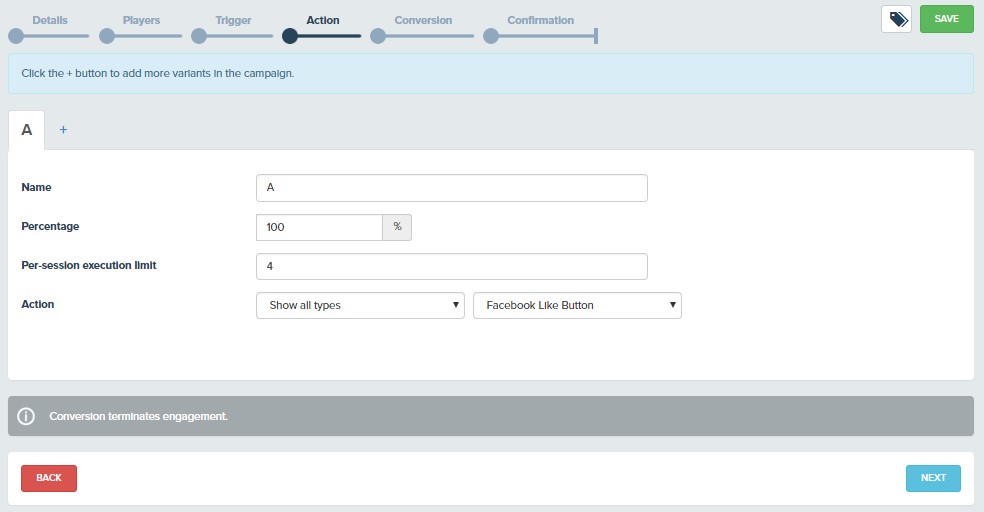 Please note, that by default an event trigger will only result in one content action being delivered to the player even if you have multiple campaigns running on the same event trigger.

However, you can override this behaviour if you want to be able to send multiple Game Parameter actions to the player simultaneously. This can be useful if you want to experiment with different game configuration combinations on launch, or different load out combinations at the start of a mission.

There is an SDK settings flag that your developer will need to set in your code to enable multi-parameter capabilities.

You can limit the frequency at which the action triggers when the user records the specified event. This is done by setting Show Conditions.
There is the option of setting the actions to be triggered at a timed interval, or on specific numeric occurrences of the event.

For example, you can set the action to trigger on the 1st time the specified event is recorded, and on every 5th activation.
When setting conditions to show the campaign only on every Nth trigger, you can also restrict the total number of executions for this action.
The following will trigger a display of the image message to the user on the 1st, 2nd, 4th, 6th, 8th, 10th event, and then subsequently every 10th time the user hits the event.

Show Conditions are not parsed by sessions, therefore if one opts to use “Show only 1st trigger”, for example, the action will only trigger once and never again in this campaign for this userID. Another example would be if one opts to use “Show on every 2nd trigger”, and the user triggers the action once and ends their session, they will trigger the action on their 1st try in their 2nd session (then again on their 3rd, 5th, 7th, etc.). 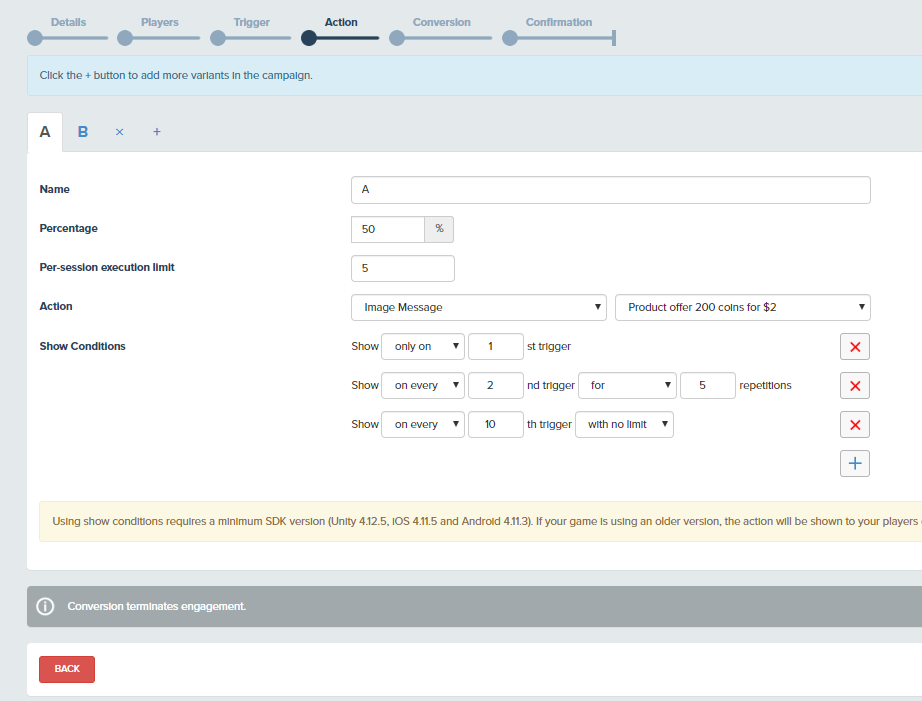 You can apply as few or as many Show Conditions as you like. By default, the action will be triggered on every valid recorded event.


Using show conditions requires a minimum SDK version (Unity SDK v4.12.5, iOS SDK v4.11.5 and Android v4.11.3). If your game is using an older version, the action will be shown to your players on every trigger.

Select the event and any additional parameter criteria that you want to use to measure conversion on this campaign.

Once the player has done what you were trying to encourage them to do, they will be measured as converted and will no longer be eligible for the campaign, even if they continue to meet the player selection criteria or record the correct event trigger, unless you have used the Reset Player Progress option on the Details page to allow them to re-enter the campaign at a later date.

The confirmation page displays the campaign so you can check them before starting it. You can save your campaign and come back to it later when you are ready to begin.

There are two modes you can use to start a campaign. Clicking “Start Test” allows you to select a segment with the “Test Segment” flag set, to run the campaign immediately for your test devices.

Clicking Publish will cause the campaign to either begin, or be scheduled as specified. 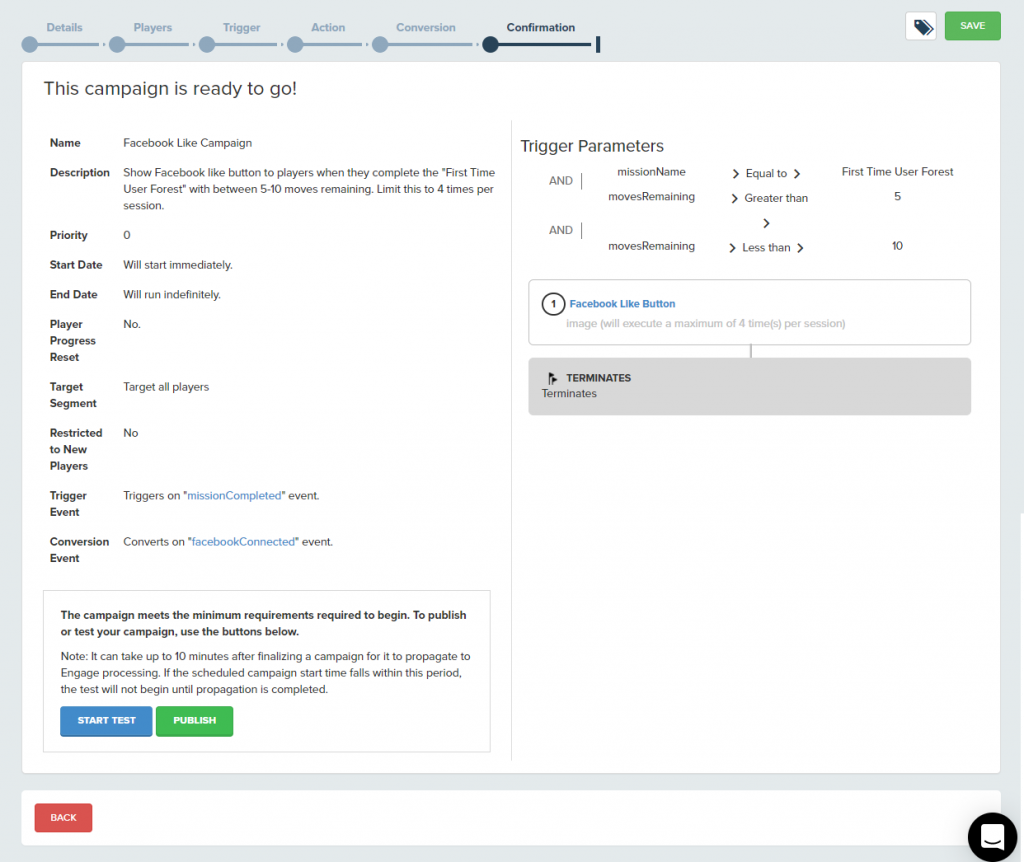 The configuration for all eligible campaigns, based on player segments, is downloaded to the player’s device at the start of each session. This means that any new campaigns or modifications to existing campaigns won’t be picked up until then player’s next session.

You can edit some details of a campaign after it has been launched using either the Edit or Quick Edit buttons, or you can Clone the campaign if you want to create a new one based on it.

If you want to debug which campaigns a player is currently eligible for, you can enter their userID in to the SETUP > TOOLS – ENGAGE > Config Trace Tool to see a list of all event triggered campaigns they are currently eligible for as well as all the other configuration data that will be passed to the SDK at the start of a session.

The deltaDNA SDK will record a ddnaEventTriggeredAction  event each time a player triggers one of these. The event contains details on the campaign, player variant, action name and type. It can be used in the Slice & Dice and Data Mining tools to perform analysis and build reports that can be published to custom dashboards. The event can even be used in segmentation and player selection for other campaigns.

Select the event and any additional criteria that you want to report on. This will often be your conversion event, but you can choose other events. Then run the report by pressing the Get Results button.  You can also give the report a name and save it as a table or a visualization so you can display it on to a custom dashboard.

The deltaDNA SDK automatically records an imageMessageAction event each time the player clicks on an Image Message Action, this is a great event for tracking how the players are interacting with your image message popups.

The example below shows the number of players each day who have been shown the Facebook Like image message popup from our campaign (Participants) and how many have subsequently recorded the Test Event with the specified criteria (Occurred). 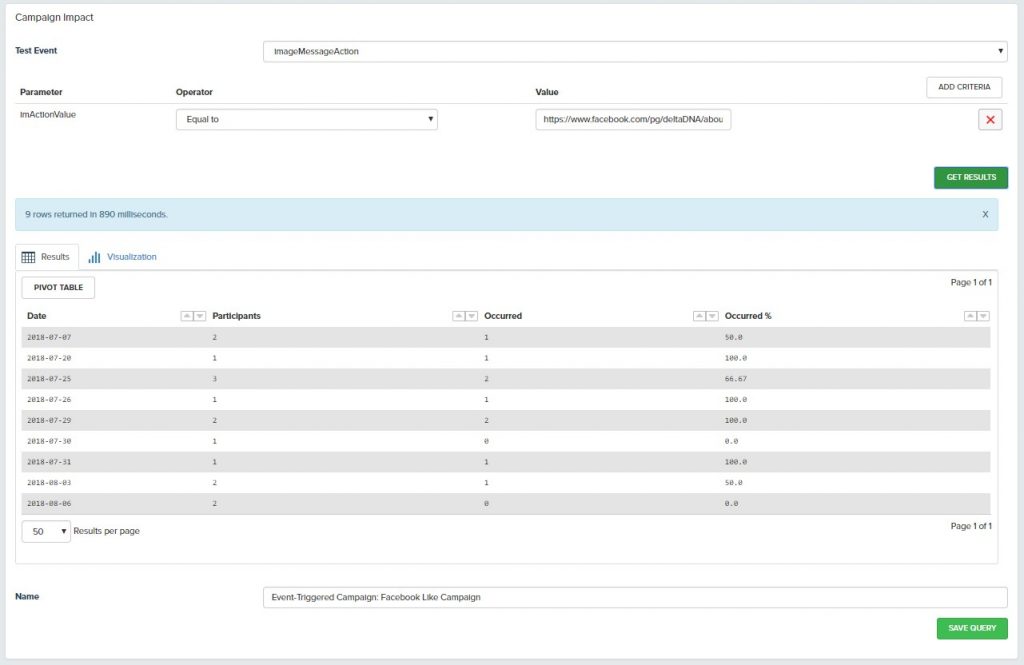