deltaDNA’s A/B Testing provides the functionality to test any number of variants against a control by changing a value of messages, parameterized content or popup images for each variant and then measuring the impact of these changes. A parameter is a key/value pair which is used to change a variable in the game such as the difficulty of a mission or the layout of a screen. Any number of parameters can be defined and passed back through the A/B testing interface giving you endless capability to test and optimise your game.

Using the powerful segmentation tool along with data passed to deltaDNA at run-time, the A/B test can target a specific group of users with a test giving you the ability to be very precise in exactly which users are included in the experiment.

A/B testing requires at least two variants, although there is no limit to the number of variants that can be set up in a test. One variant is always served no parameters and is defined as the control, the other variants are served modified parameters as defined by the test. Each variant is automatically set up to be of equal size to keep the test statistically accurate, but you can manually adjust the size of the variants as long as they all add up to 100%.

You then set a conversion event which is the event that must be achieved by the user for them to count as a successful conversion. This event can be any event, with success based on a set of parameters of the event meeting the required criteria. This allows a conversion to be based on a precise event criteria. In this example, looking for a missionCompleted event, with the missionID equal to 3 would indicate that the player had completed the mission.

When your A/B Test is configured you will be shown a confirmation screen be so you can check the details before starting the test. 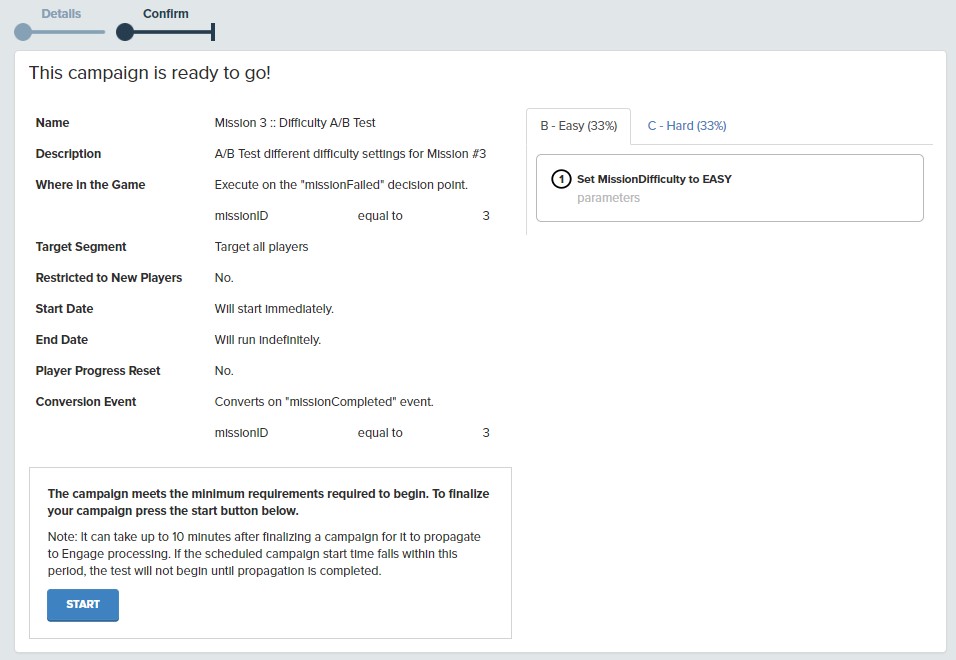 There is nothing to stop you using deltaDNA to test multiple things in a single test. You can send as many parameters as you require in each test, giving you the ability to test a range of prices or alter aspects of the game in different ways.

The system will allow you to run tests simultaneously, the same users will be included in both tests. If you are confident the tests will not interfere with each other this is a good approach to maximise the number of participants in each test. If you want to make sure users are only selected for one test at a time, use the exclusive check box on the Test Details page. This will keep users that are eligible for two exclusive tests to be selected for only one of the tests.

deltaDNA provides two views of the running tests, that can be filtered by date, or the decision point they they are triggered on.

The A/B Test Calendar  is useful for showing overlapping campaigns and scheduled events.

You can view the results of an A/B Test after it has been started. 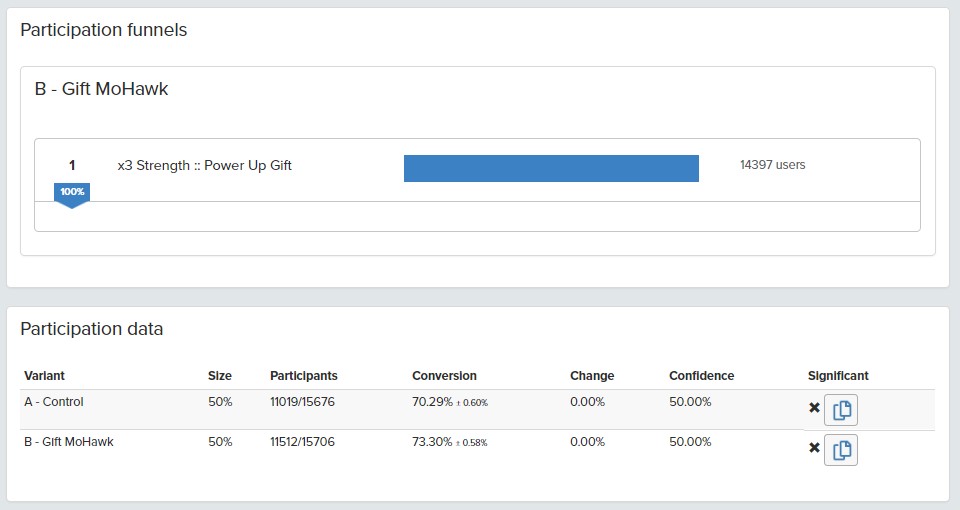 Once a test is complete deltaDNA will calculate the confidence and significance of the test and show you the conversion for each variant. You can also use the A/B testing dashboard to look at any chart on the dashboard split by the A/B test to see the impact the test had on KPI’s.

For A/B Testing to work you must instrument the game to be able to react to the parameters being returned to it.